Cars similar to this were fielded by the Mercedes Benz Works Team between 1960 and 1964 in major International Rallies including a win in the 1960 Monte Carlo Rally (Walter Schock/Rolf Moll) with 2nd, 3rd and 5th places in similar cars.

In 2013, when Rick’s health deteriorated, and he could no longer compete, the car was sold to Alan Chambers.

After running the BP Rally in 2013 (retiring with an ill Navigator) and an eventful Bagshot Rallysprint in 2013, the motor was replaced with a fully rebuilt 2.8litre 280 SE unit.

The car is now somewhat pampered but competes occasionally in selected HRA Autocross and Rallysprint events. 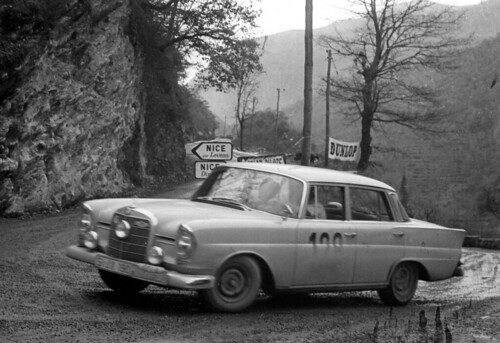 Mercedes press photo of Walter Schock and Rolf Moll on their way to winning the 1960 Monte Carlo Rally in their Mercedes-Benz 220 SE .