Banner: A 1963 Mini Cooper S. This car, which was one of the cars prepared by the BMC competitions department, won outright victory in the 1964 Monte Carlo Rally. It was crewed by Paddy Hopkirk and Henry Liddon. This vehicle is kept at the British Motor Museum, Gaydon, UK. 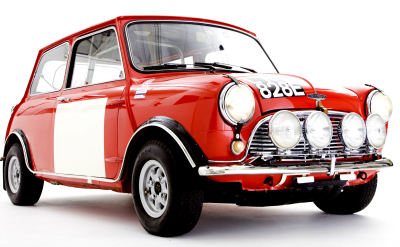